A Stream of Consciousness

In a world of hard-working capitalistic lifestyle and highly developed social media, external influences have an enormous impact on one’s lifestyle. As a consequence, the well-being of an individual is often exposed to disturbances and pain; thus, turning inwards and seeking inner guidance have become essential components of navigating a happy, fulfilling, and healthy life journey. Deeply moved by the emotional struggles of a human being in a modern society, Ellen Von Wiegand creates art with the intention to help others find their inner peace.

“I hope people can recognize themselves in my figures, and that my images help to offer a sense of relief through the shared experience of moving through anxiety.”

Ellen has felt a strong connection to art throughout her childhood and adolescence years but decided to opt for a behind-the-scenes art journey and study Art History. Afraid of being the center of attention, as many artists are, she chose the route that allowed her to pursue a career being surrounded by things she’s passionate about and protecting her vulnerability by remaining private at the same time. After receiving her degree and working in the industry for some time, Ellen began to feel anxious around artworks, slowly coming to the conclusion that what she really desired was to be an artist and creator herself.

During her master’s degree program where she studied Contemporary Art, Von Wiegand became drawn to the linocut: a printmaking technique largely popularized at the beginning of the 20th century, due to the soft texture of linoleum and its wider availability. At first, inspired by a group of German expressionist artists (called The Bridge) and Picasso – who were amongst the first artists who used linocut printmaking – Von Wiegand chose this technique as her preferred medium to work with. Using Pfeil carving tools, Caligo inks, and relatively thin Japanese or Chinese papers, like Hosho or Jiaxuan, Von Wiegand does all parts of the process by hand: from original drawing to the carving and final printing. Because every print is hand-pressed, each has some minor differences, which makes every linocut an original and unique work of art.

Dealing with her own struggles that stem from being an anxious introvert, Von Wiegand uses her insecurities as a tool for expression and connection through her work.

“My art began to tell something about my own insecurity, the kind that prevented me from following my path as an artist for so long.”

Discovering her love of intimate moments and the kind of poses that reveal an emotional struggle, the artist uses her own nude body as a model in each piece which symbolizes her vulnerability and strength – strength to openly be vulnerable in front of the viewer’s eye. Using herself as a model gives the artist full control over compositions and makes her artwork highly personal.

“I always work from photographs of myself, because it’s most convenient for my love of working in solitude.”

For Ellen Von Wiegand, art became a way to heal herself: by representing her fears, anxieties, and insecurities, she confronts them and integrates them into the wholeness of who she is. Postures of her nude body give the observer a pathway into their own psyche: through engaging with Von Wiegand’s physical representations of emotional states of being, they can recognize a part of themselves in each print. The uncomfortable parts can inspire people to stop resisting and judging themselves, thus, getting into a deep state of self-love, self-acceptance, and self-healing. 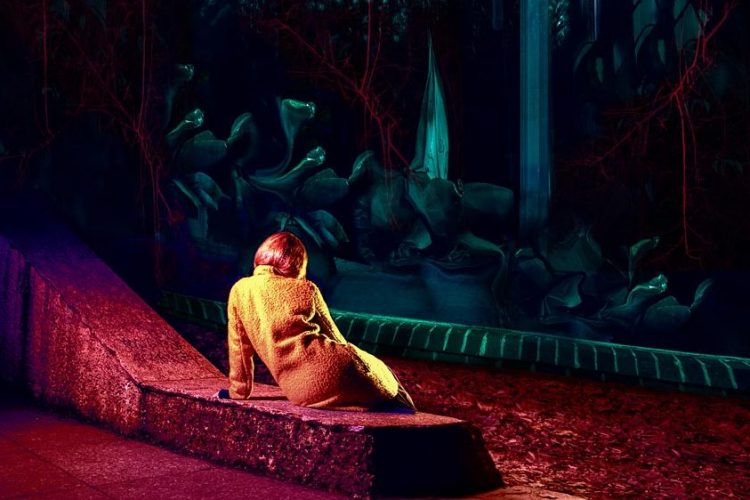